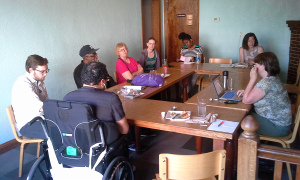 BIGMN meeting at Common Roots Cafe in Minneapolis. Not pictured: Eric Stetson (photographer), Troy Benjegerdes, and several others seated outside the range of the camera.

About 15 people attended the meeting. Liane Gale, the founder of the group, and several others expressed strong interest and support for Grantcoin, and it was discussed further in an organizing meeting immediately after Eric’s talk. Some members suggested approaching local businesses in Minneapolis to encourage them to accept Grantcoin as a form of payment. Eric also suggested that BIGMN become affilated with the Grantcoin Foundation, and members expressed interest to consider this.

“I was excited to have the opportunity to speak with an enthusiastic group of activists for Universal Basic Income, and to listen in on their organizing meeting,” said Eric Stetson. “I can’t wait to see what this group does for the basic income movement in Minnesota and to watch it grow! The Grantcoin Foundation looks forward to keeping in touch and building a long-term relationship with BIGMN.”