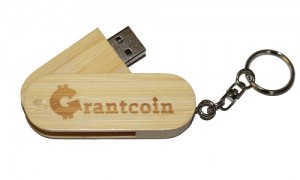 In a historic development, Grantcoin has become the first cryptocurrency to be managed and distributed by an IRS-approved tax-exempt public charity. The Grantcoin Foundation, a nonprofit organization incorporated in Delaware, has been approved by the U.S. Internal Revenue Service for 501(c)(3) status, which allows Grantcoin supporters in the United States to receive a full tax deduction for their charitable contributions to Grantcoin’s governing body. 501(c)(3) organizations are legally required to have a charitable mission and adhere to high standards of ethics and transparency.

“The whole Grantcoin team is incredibly proud to have achieved this milestone,” said Eric Stetson, founder and Executive Director of the Grantcoin Foundation. “As the first philanthropy-backed digital currency with an affirmative IRS determination of tax-exempt status, Grantcoin is breaking new ground. We are the charitable alternative to Bitcoin.”

In conjunction with this announcement, the Grantcoin Foundation is launching two new programs:

Over 80% of the total supply of Grantcoin is reserved for charitable grants to help create a more humane and sustainable world. Grantcoin will be distributed in each nation and community proportionally to its population, to help shift the economy towards a more fair distribution of wealth as the currency gains users and value.

“We’re building an alternative currency system inspired by people’s belief in social justice and the public good, and backed by their philanthropic support,” said the founder of Grantcoin. “Imagine a world where humanity’s most worthy values and actions are built in to the way money works — that’s the world Grantcoin is creating. All we need is people to join this movement for an equitable and sustainable global economy,” said Stetson. “Together we can make it happen.”

Grantcoin was launched to the public on May 1, 2015 and is led by a team of socially conscious entrepreneurs and activists in the United States. The Grantcoin Foundation plans to establish affiliates in communities around the world, which will assist in the distribution and widespread adoption of Grantcoin. For more information and to get involved, visit grantcoin.org.